The Birth of the Original CCI at Fair Hill International

In 1925, William duPont, Jr. began to assemble a tract of land on the Maryland-Pennsylvania border that would eventually encompass more that 7,600 acres. He wanted to create a nature preserve where he could raise some cattle and engage in his two favorite pastimes: horse racing and foxhunting.

He was nothing if not a patient man – as he gradually added to his holdings he designed a spectacular steeplechase course and then waited seven years before he allowed a horse to set foot on it. He realized the importance of thick, smooth, healthy turf and he knew that nature couldn’t be rushed.

In the interim, Mr. duPont didn’t sit idly by. Setting out to prepare his new property for the foxhunting that he loved, he moved his pack of hounds up from his family home in Virginia. To ensure their safety, he built bridges over the roads, tunnels under them, and encircled the property with 17 miles of “super fence”, a chain link barrier that was set in three-foot concrete footers with a “T” section across the top. Even the most aggressive hound (or fox) couldn’t dig under it or climb over it.

And so it stayed for many years. Mr. duPont died on New Year’s Eve, 1965 and, nine years later, the state of Maryland purchased from his estate the 5,633 acre portion of Fair Hill that lay within its borders.

In 1989, Elkins “Elkie” Wetherill and John Ryan, organizers of the Chesterlands Three-DayEvent, which had offered high performance competition at its former location in Unionville, PA, were looking for a new site for its CCI***. They were directed to Fair Hill and enlisted the aid of Trish Gilbert, who lived just down the road in Churchville, MD.

When they saw the part of Fair Hill that lay east of Gallaher Road and south of Rt. 273, they knew they’d found their new home. Its gently rolling terrain, meandering streams, and thick, lush turf made it the ideal venue for eventing. 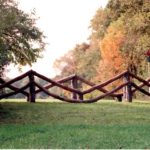 They secured the services of England’s Michael Tucker, a world renowned expert, to design a cross-country course that was worthy of its surroundings. Like a talented sculptor who “sees” the image within the marble, Tucker accepted the challenge. By blending the obstacles, the water, and the galloping lanes with the natural contours of the land, he produced a course that exceeded expectations. Mr. duPont would have been proud.

The first event was conducted in October, 1989, and the CCI*** was won by Karen Lende (better known today as Karen O’Connor) on Nos Ecus.

Tucker continued to apply his magical touch to Fair Hill for eight more years until, in 1999, he passed the reins to Derek di Grazia, a retired eventer who had won the third edition of the Fair Hill CCI*** in 1991. Derek rose to the challenge with alacrity and, in short order, he produced a championship course that has only gotten better with each passing year.

But it’s among the horses and riders that Fair Hill has earned its well-deserved reputation as a cradle of champions. It has always attracted the best of the best, and that’s not a coincidence. Riders come here to test themselves and their horses to see if they have the talent and courage to succeed at the upper levels. Indeed, Phillip Dutton could have been speaking for everyone when he said, “When you get around the course at Fair Hill, you know you have a cross-country horse.” 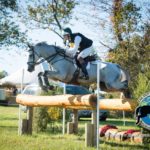 A partial list of riders who have won the CCI*** at Fair Hill amounts to a veritable Who’s Who in American Eventing – David O’Connor (5 times), Phillip Dutton (4), Karen Lende O’Connor (2), and Bruce Davidson. Those stalwarts have captured more than half of the 24 runnings to date and have parlayed those accomplishments into Olympic glory for themselves and their country.

Written in 2013 by Charles T. Colgan for FHI’s 25th Anniversary

The Birth of the Maryland 5 Star at Fair Hill International

The storied tradition of Eventing at beautiful Fair Hill continues with the inaugural Maryland 5 Star to be held at the newly constructed Fair Hill Special Event Zone in Elkton, MD (Cecil County). One of only two 5 Star events in the United States, and seventh worldwide, the prestigious 5 Star (CCI5*-L) designation is the pinnacle of the sport of eventing, best described as an equestrian triathlon. Arriving in October 2021, the Maryland 5 Star at Fair Hill marks a new chapter for the state of Maryland’s prestigious horse and equestrian tradition.

In 2019, the newly formed Sport and Entertainment Corporation of Maryland’s (The Sport Corp.) first action was developing The Fair Hill Organizing Committee (FHOC) to successfully manage all aspects of the inaugural Maryland 5 Star at Fair Hill.

In 1991 the Fair Hill Fall Combined Driving Event joined weekends with Fair Hill International Three-Day Event, so spectators could watch eventing and driving at the same venue on the same weekend. FHI hosted numerous USET National Driving Championships at the Advanced level from 1991 through 2007, the final year FHI held a fall driving event. From 1996 – 2000 FHI CDE was the final jewel of the Jaguar Triple Crown of Driving which sent the winner on an all expense paid trip to the Royal Windsor Horse Show in England including the free use of a new Jaguar while there. While we no longer host a fall CDE, Combined Driving has continued to be represented at Fair Hill with the Elk Creek CDE in June, which offers all levels of competition to allow everyone a chance to experience the beautiful Fair Hill property.

FHI began hosting a spring endurance ride, the Foxcatcher Endurance ride, in 2001. Foxcatcher typically offers a 50 mile and a 25 mile division, and has also hosted Ride and Tie events for the past several years. From 2002 through 2005 FHI also hosted a fall endurance ride in conjunction with the FHI Three Day Event. The fall endurance ride offered a 100 mile and a 50 mile division. In 2005 FHI hosted the 100 mile North American Endurance Championship, with teams from across North America competing for individual and team medals.